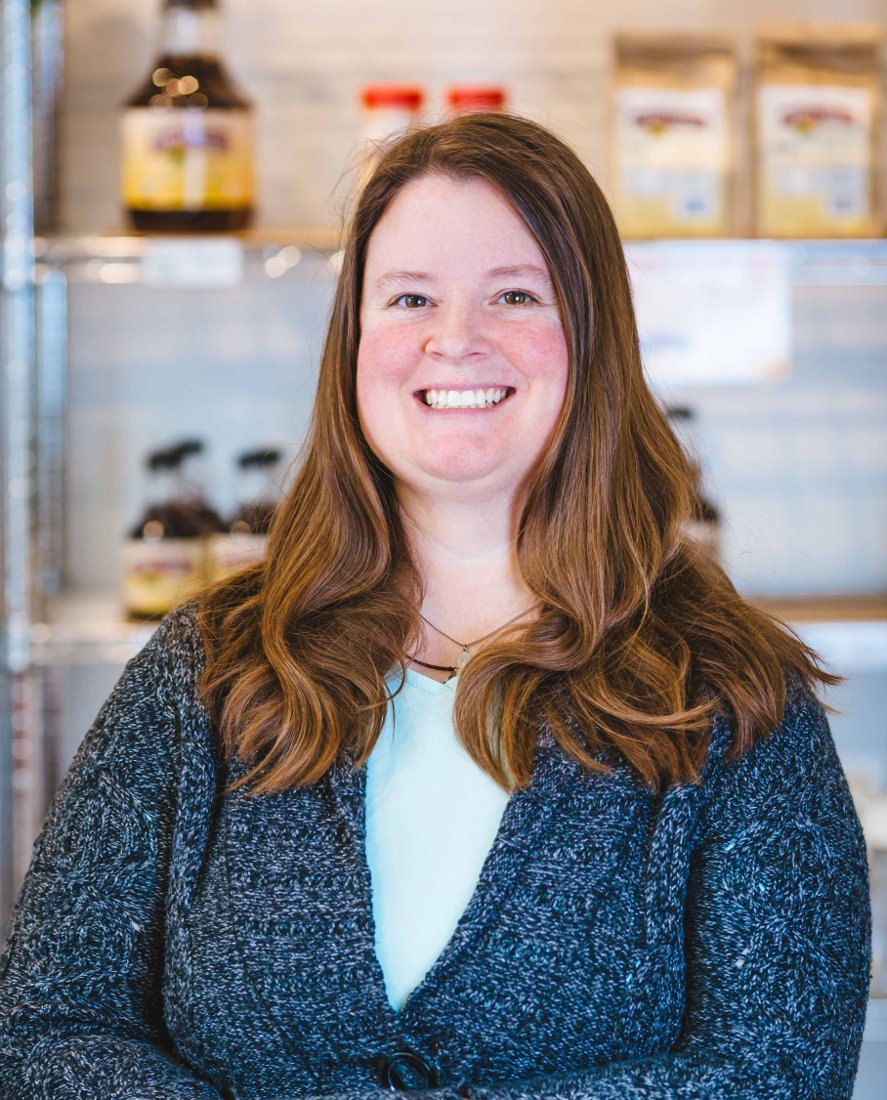 The role of a General Manager is a demanding and multifaceted one. Someone who holds such a title must be able to handle anything that is thrown at her with an air of confidence and calm. Renee Miller, General Manager of our cooperative, is just the person for the job. Known to her friends as being very ambitious and stable, she handles the daily challenges of her position here at Maple Valley with ease.

Before beginning her work at Maple Valley, Renee had a variety of work experiences. She volunteered for 6 months at an orphanage in Peru. She worked as a manager at a grocery store and then a creamery. Also, she farmed organic produce to sell to local company Organic Valley and ran a small CSA with the extra produce. At the same time, she formulated her own line of preservative free lotions, lip balms, cold pressed soaps, and salves and sold them in local businesses. One of these local businesses was Maple Valley’s storefront location in downtown Cashton, WI where she lived.

In 2010, she was working part time at a childcare facility in town. It gave her the freedom to focus on her three year old daughter Alynnsia as a single mother. Unfortunately, the facility was forced to close due to a lack of enrollment, and Renee was out of a job. 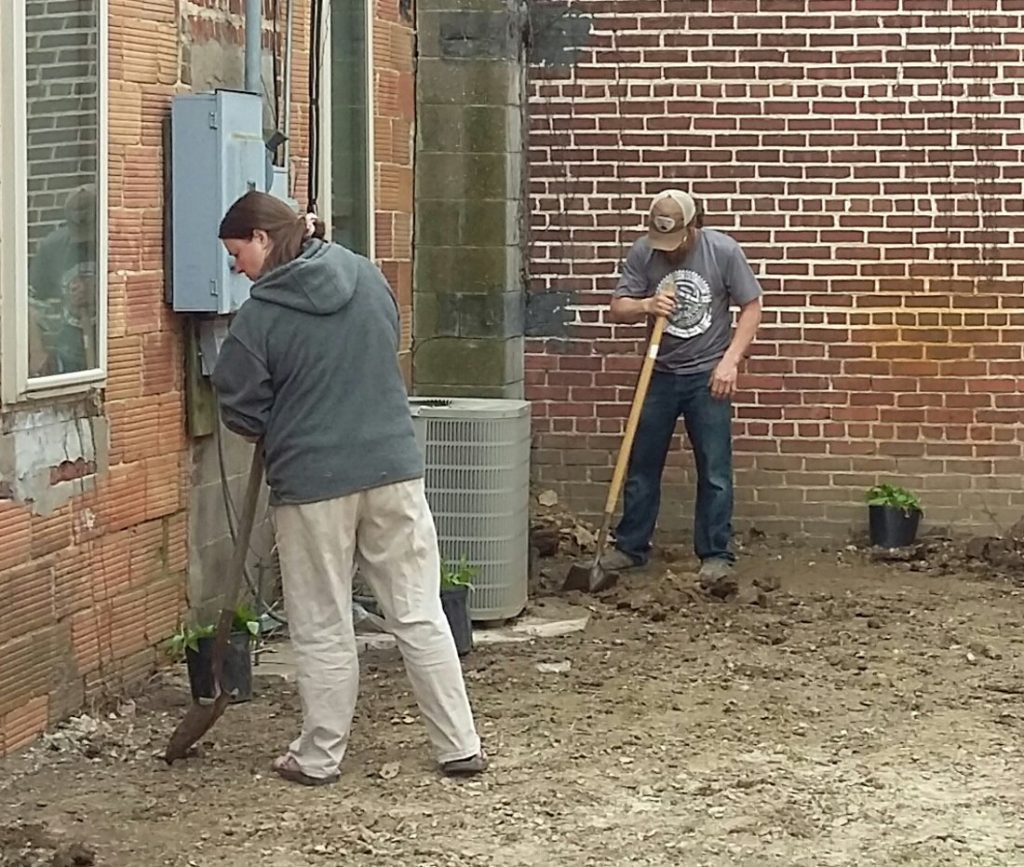 It felt a little bit like kismet when Martha, Maple Valley’s Office Manager at that time, approached Renee to ask if she might be interested in a job. The location was perfect and the role was only part time. Also, Renee had practiced a chemical-free, organic lifestyle since childhood. She was excited about the prospect of working for a company that held the same values as herself. She agreed to take the position at the cooperative.

Renee was one of only four employees when she started out at Maple Valley. Besides herself, there was also Martha the Office Manager, Mark the Bottler, and Jess the finance manager. They also had a contracted broker who helped to sell syrup and a sales person named Linda who was on leave when she started. Renee was responsible for order fulfillment. Each day she would build packages & pallets to be sent to online and wholesale customers.

After she had been working there for a while, there was a need for someone to make maple cream for the cooperative. Renee volunteered to learn because she enjoyed working in the kitchen. Her first batch went well, so she took it on as a regular part of her job. For some time, she continued to work for 20 hours a week building orders & making maple cream. 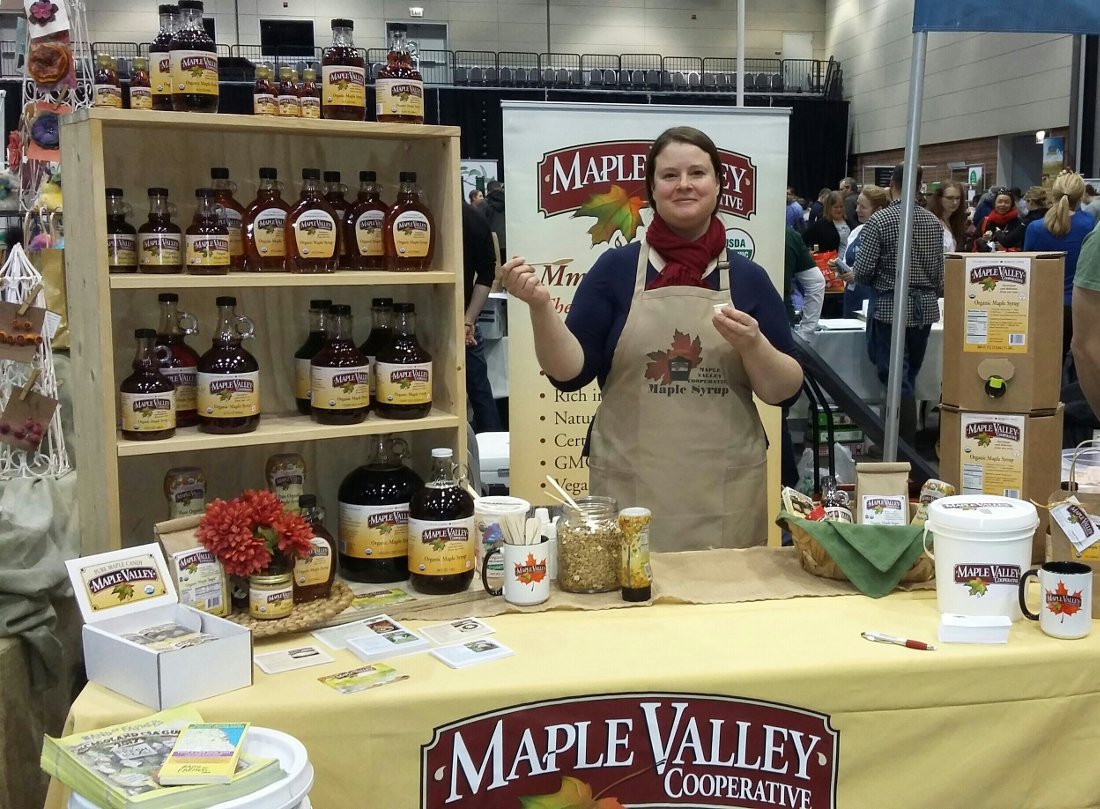 As time passed, the cooperative began to grow and change. Renee was asked to try taking on a sales role and she agreed. In her new role, she called customers, took on new accounts, and gained a new pallet customer.

As more employees joined the team, and sales increased, Renee started to notice changes that could be made to improve productivity. She shared her feedback & ideas with the rest of the team. Seeing that she had a talent for such things, they asked her to switch to operations manager. She did so until Jim Neidel joined the team. The two of them co-managed for a year after which Jim took on the Operations Manager role and Renee was officially named General Manager.

More Than a Job

As she has always done, Renee continues to grow her role here at Maple Valley. Last year she was elected as the employee class board member for the cooperative. Renee states she took on the additional responsibility because she felt that “employees need someone on the board who can really understand the business and who works directly with the employees to be a representative and make their voices heard.”

Outside of her work at Maple Valley Cooperative, Renee continues to garden. She also enjoys spending time with her daughter who is now 10. Family is important to Renee who has a large extended family. She also considers the many animals she has rescued as family. As a hobby, she enjoys working on perfecting her recipe for Einkorn Sourdough bread.

“It is what we do by utilizing a gift from nature and producing a product from nature that is good for people. It is the employees that are passionate about the product. All of that makes me want to help Maple Valley be a leader because it all contributes to the world in a positive way – from the trees providing something good for people, to people giving back to the earth in a positive way.” – Renee Miller