The Origin of the Waffle

March 25th is International Waffle Day!  And, that got me thinking about the origin of the waffle. Where did they come from and when? The waffle has a long and interesting history and I guarantee by the time you’re done reading this post, you’ll have a craving for waffles slathered in butter and drenched in Maple Valley syrup.

The Origin of the Waffle

Precursors to waffles existed over 4,000 years ago when hotcakes were cooked on heated stones and were flipped so that both sides received heat. At some time during the Iron Age, heated iron plates, or griddles, were used on both sides of these cakes. In Ancient Greece, and later during the Middle Ages, many variations of these cakes were made, which were called obleios (wafers). The first known “waffle” recipe was made in the late 14th century, but is was a waffle in name only, as it did not include a leavening agent. What we now know as a waffle began taking shape in the 15th century, with the food being made in the familiar grid pattern, leavening agents began being used during the following century.

There is evidence of waffles being sold on the street all the way back to 1603, but they first came to America with the Dutch immigrants settling in New York, New Jersey and Pennsylvania in the 17th century. In 1725, the word waffle was first used in the English language, and recipes spread through England and America. Many of these were based on earlier Dutch, French, and Belgian recipes.

Originally, the typical waffle iron was a cast-iron-hinged device that was held over an open fire. Cornelius Swartwout of Troy, NY patented a waffle iron on August 24,1869, which is why that day is National Waffle Day. It wasn’t until the 1910s that General Electric’s electric waffle iron was introduced. By the 1930s, waffle irons were standard kitchen appliances. 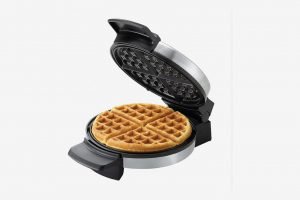 Waffles – from Frozen to Belgian!

In 1953, the Dorsa brothers introduced frozen waffles, and they changed their name to Eggo in 1955. Today, we have many kinds of frozen waffles available to us when we are short on time (or have kids who are hungry NOW) and can’t make them homemade. Here are my favorite frozen waffles:

We all know homemade waffles are the BEST and there are all kinds of ways to make them – easier ways like with a mix where you just add water, eggs and oil – and the truly homemade with a detailed recipe. At Maple Valley, we’re all about the maple in everything, so we have a recipe for Maple Spice Waffles that you should check out! 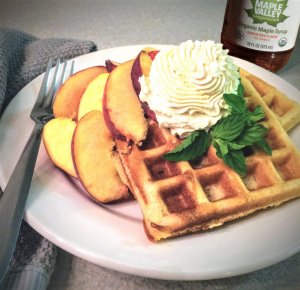 Here are a few things people have learned along the way and if you pay attention, you can be a waffle making champ:

International Waffle Day is observed around the world but is most prominently celebrated in Sweden, the country where it started and where it is simply known as Waffle Day. It takes place on the same day as the Feast of Annunciation, a holiday that celebrates Jesus’ conception, which occurs nine months before Christmas. In the Swedish language, Vårfrudagen, means “Our Lady Day,” another name for the Feast of Annunciation. It sounds similar to Våffeldagen, the Swedish word for “waffle.” International Waffle Day got its start after the Swedes started eating waffles to celebrate. The day then spread to other countries. It’s a day for all of us to eat waffles – as if we needed this excuse! But, if you need another reason to indulge, just wait until August 24th for National Waffle Day.